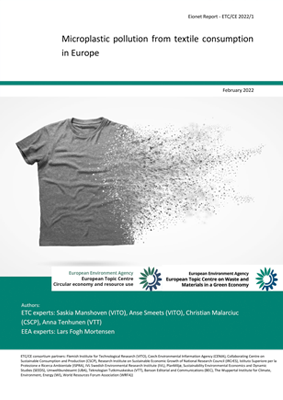 Plastics play an essential role in modern society. Their diversity and versatility make them indispensable materials used across all sectors from electronics and consumer goods through to synthetic textiles and food packaging. In 2019, almost 370 million tonnes of plastics, plus around 70 million tonnes of synthetic fibre, were produced globally of which 58 million tonnes originated in Europe. However, since most plastics are made of fossil resources and persist in the environment for many years, concern about microplastic pollution in seas, land and air has increased. While some microplastics are produced on purpose for dedicated applications, most result from weathering and degradation of plastic products. Among other sources, wearing and washing of synthetic textiles is regarded as a significant source of microplastics in the environment, responsible for the discharge of between 0.2 and 0.5 million tonnes of microplastics into the oceans each year.

The aim of this report is to contribute to an improved understanding of microplastics release from textiles and their effects on the environment and human health.

Discussing the Social Impacts of Circularity