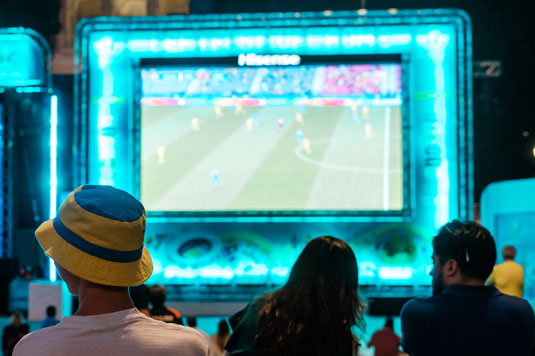 The far-reaching effects of our diets and food production on the climate and biodiversity through land, resource and water consumption are a call on all relevant actors to take action and make environmentally-friendly food available and accessible to everyone.

International football tournaments enjoy great social and media attention in Germany and across Europe, offering an opportunity to raise awareness on topics of societal interest beyond football. The 17th UEFA Football Championship (EURO 2024) hosted by Germany will be an event of great magnitude: one month, 24 teams, 10 cities, 70,000 fans in the final, and a multi-million audience in Europe and across the world.

To raise awareness on as well as mainstream environmentally-friendly food, the KochCup project will organise a competition with German trainee chefs that will run in parallel with the EURO 2024 tournament.

About 150 trainees of different cooking schools around Germany will be motivated and supported by the project to create their own environmentally-friendly recipes. They will compete against each-other in the preliminary rounds in 10 German host cities in order to qualify for the final event in Berlin, where the EURO 2024 final will also take place. In the preparation and implementation of the preliminary rounds, the project team will maintain close cooperation with the participating vocational schools.

All winners (from the regional preliminary rounds as well as the final in Berlin) will receive awards and their recipes will be highlighted on the project website, shared with the media, and on social media. The restaurants and catering businesses in which the winners work will also receive materials to support them increase the visibility of the new recipes.

The competition will be accompanied by an expert advisory board and a jury of food and environmental experts as well as cooks and athletes, who serve both as advisors and multipliers. The project will support the inclusion of winning recipes in restaurant menus and catering businesses.

Throughout the entire competition phase, the CSCP and its project partner, tippingpoints will make the content accessible to the broad public in various ways. The recipes will be judged by a professional jury, but an additional online voting by the audience will ensure that the wider public is also on board. Moreover, the project will engage with local and national media in sharing project updates in order to create widespread awareness on the topic.

The project is funded by the German Federal Ministry for the Environment, Nature Conservation, Nuclear Safety and Consumer Protection.

CSR.digital Highlights: Staying Sustainable in Times of Crisis Through Digitalisation

A Space to Promote Sustainability: The Gläserne Werkstatt in Solingen Opens its Doors